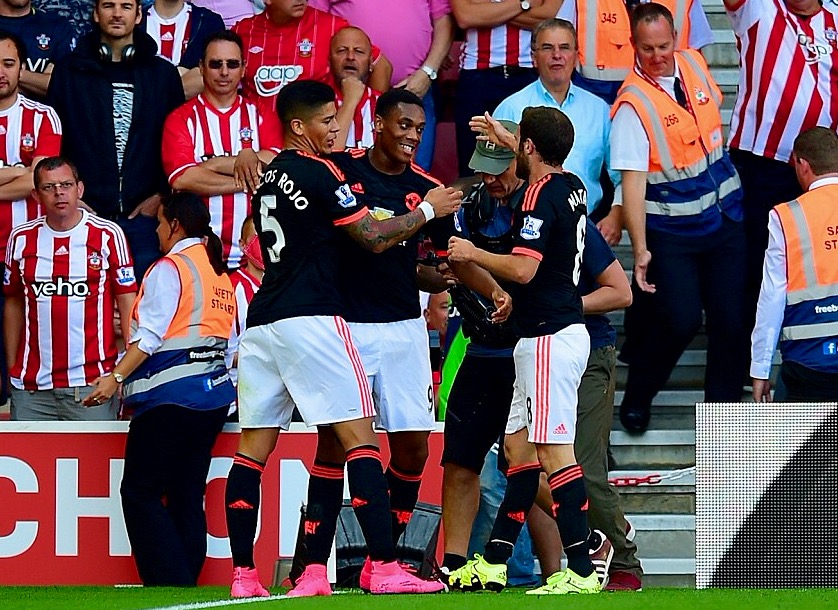 A WIN DEDICATED TO LUKE SHAW

I’ve just got home from Southampton. I’m very happy for a victory that takes the team to the second position, allowing us to finish the week in a much better way that we started it, after the first game in the Champions League group stage. We knew how important was to win at St Mary’s after some of our main rivals had dropped points on Saturday, and we were able to make it, but the game had different stages…

In the first 30 minutes they were the better team, scoring a goal and creating several chances, but we could tie the score before half time. After the break, we had a better control of the game, Anthony scored again and we carried on until I was able to complete a fantastic collective play with 45 consecutive passes. The assist came from the post after Memphis shot and I could make the third goal. However, as I said afterwards, in the Premier League you have to fight until the end in almost every game. Pelle scored again for Southampton and they kept trying, but David was there to make amazing saves, like many other times in the last few years, and so we won.

In short, it was an important and very special win. Everybody knows that last Tuesday was a bad day for us. Because of the defeat but, especially, because of Luke Shaw’s terribly serious injury. He was very unlucky and suffered a double fracture of his right leg; all of us felt his pain. That’s why we wanted to dedicate a victory to him as soon as possible, to make him feel happy, at least momentarily, and it came this very Sunday. I’m sure he will be back stronger, and he will work hard to be with us soon. He was having a great start this season, helping us a lot. All our support to you, my friend, you know we are here with you!

I don’t want to forget about another good thing of this game: meeting again my friend Oriol Romeu, one of the best guys I have ever met in football. I wish him all the luck in the world. His shirt is already in my collection 😉

On the way home we knew about Spain’s victory in the Eurobasket. It’s the best finale to a great tournament. The team has shown how to overcome a bad start with talent and team spirit. During the week I enjoyed watching the games against Greece and France. Pau Gasol was extraordinary! In my opinion he is one of the best Spanish sportsmen in history. He puts a lot of passion in everything he does, he is committed to sports and very respectful to his team-mates and to the opponents. He is a leading example in many ways. Congratulations to this generation of players for so many good moments through all these years. The whole country admires and praises them. You guys are great.

Back to football, the weekend in la Liga produced the wins of Real Madrid, Barcelona and Atletico. Granada did not make it easy for Real Madrid and they were able to get at least one point. On Saturday, I also watched Atletico’s game in Ipurua. One of the goals was from Fernando Torres, and it was a very typical goal from him… Certain things will never change!

Meanwhile, Barcelona have won four games out of four. Luis Enrique’s team keep the momentum of last season and it seems they are not willing to slow down.

Lastly, I wanted to thank you again for your comments and suggestions on the YouTube channel. I hope to surprise you with a new video this week, let me know if you like it. I’m going to leave you know. In a few hours we will be back to training. We have to recover from our last game and prepare for the next two this week: on Wednesday we start in the Capital One Cup against Ipswich Town. They are a historic team in English football and I’m sure it won’t be an easy game for us. After that we play against Sunderland, they need the points and they will come to Old Trafford trying to win. We hope to play good and be successful on both games. It would be a joy for everybody: for us, for you… and for Luke.