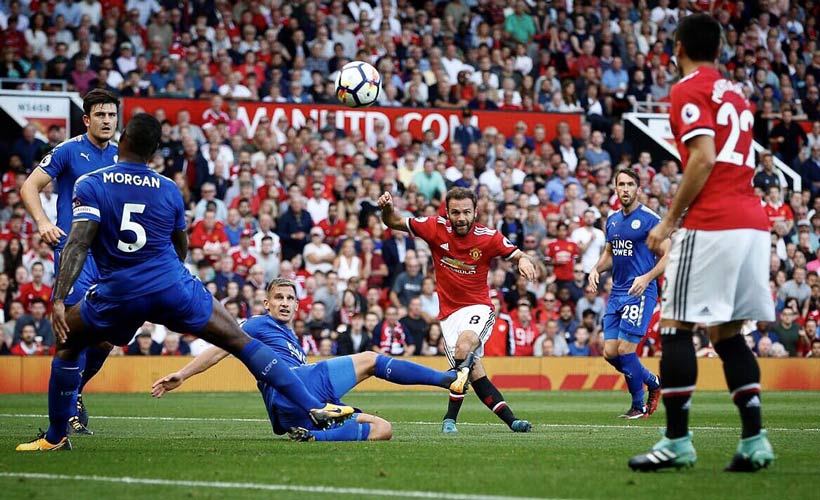 A winning streak… but our feet are on the ground

My third blog’s entry of the season… and the team’s third win. I hope to go on like this until May, only 35 games left…! :-/ The truth is, in a moment like this, you want the next game to start as soon as possible to keep your winning streak, but as you know we have to stop for the first international break. Anyway, the goal of getting nine points out of nine has been achieved, and the best thing is the good vibes that the team shows on the pitch, the ability to dominate the games and the patience to end up scoring and winning. And the three clean sheets prove our strength so far. That’s good news because this is the consistency we’re looking for, in order to reach the last spell of the season in a good position for the final sprint.

On Saturday, against Leicester, I think we deserved the victory. We created enough chances to win and to enjoy one of those happy evenings at Old Trafford thanks to our amazing crowd. It took some time to score, but we kept believing in our chances to win. We are very happy, indeed, but we keep our feet on the ground; this is just the beginning. The Premier League is long and very tough, arguably the most difficult league in Europe, and there is a very long way to go.

It was the week of the Champions League draw, a competition where Manchester United deserves to be always. Benfica, Basel and CSKA Moscow will test our ability to take the name of this great club with pride and class all around Europe. Starting at Old Trafford should give us confidence to have a good performance during the group stage. We are looking forward to listening again to that nice music that turns the Theatre of Dreams into one of the most special places in the world. Usain Bolt, a legend of sports and a passionate United fan, was there last Saturday enjoying the game. It was a pleasure to have a chat with him and see how happy he was after the match. He is, and he will always be, a true legend! Who knows, he might end up training with us one day… 😉

Also, last Thursday you could watch on the club’s TV the second part of my meeting with actor Dominic Monaghan, another lifelong Red. You may remember our first meeting a few months ago, when we strolled around Manchester; this time he invited me to visit some of his favourite places in LA. You will have another chance to watch it as of tomorrow. I hope you enjoyed it as much as we did.

In Spain, Real Madrid played at home against Valencia, a club starting on a new stage that looked good the first week. The game finished with a 2-2 draw after a great performance by the visitors and two nice goals from Asensio.

Meanwhile, Barcelona got a solid win in Vitoria, a tough place to get the three points, and the same about Atlético in Las Palmas. Those three teams are likely to be the main favourites in the title race, as it’s been in the last few years in La Liga. In the Second Division, Oviedo got their first point in Almeria against another historic club.

Once again, thank you all for your interest and optimism around the Common Goal initiative. As you know this is a very exciting project; we will be giving more good news about it soon… :-).

Have a nice week. Hugs‎,

PS: The Vuelta a España has been very thrilling so far. Froome is determined to win this year after getting very close several times in the past. There are still quite a few stages ahead; the race is being spectacular and very entertaining. Do you like cycling?