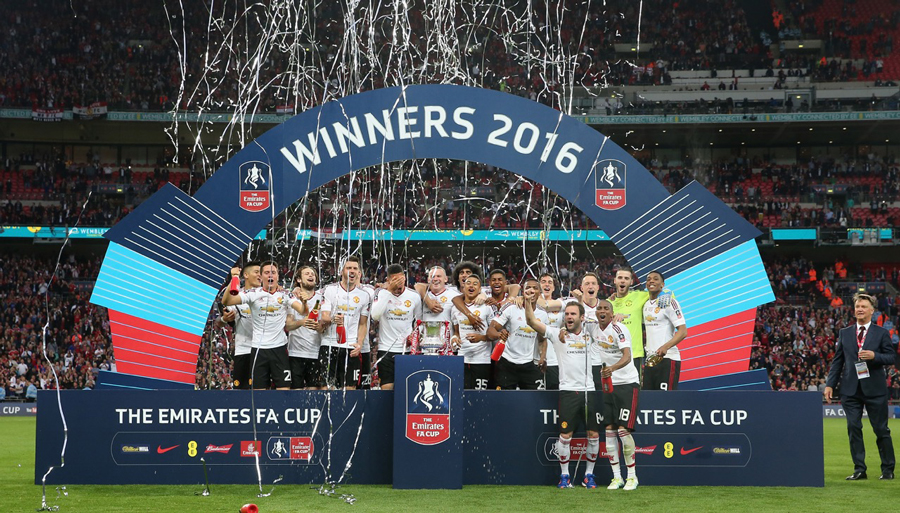 Hi everyone,
My first trophy with United, finally! It took quite a few years for the club to win again the FA Cup, that special and unique tournament, and last Saturday we made it… Being able to win this Cup for you, after your unconditional support throughout the entire season, makes me feel absolutely happy and proud. You deserved it, for sure. The road to the final wasn’t easy at all. And the same can be said about the game against Crystal Palace: it was thrilling, like a big final is meant to be. For everyone familiar with English football, I’m not revealing any secret by saying that this competition is different, genuine, and so it is the final at Wembley, with its amazing atmosphere. We saw it just a couple of days ago. The FA Cup final is an unforgettable experience: the organisation, the pre-match show, the tension during the game… Luckily for me, I have been involved in two and both of them ended up with me lifting the trophy. I feel privileged for that.
I have to say that 10 minutes before the end of the game things looked pretty different. After Puncheon’s goal for Palace we didn’t have much time to react. Luckily, Wayne made a great play, then came Felli’s assist and I scored to take the game into the extra-time. Things got complicated again after Chris being sent off, but then it happened: Jesse scored a fantastic goal to get us the title and finish the season in the best possible way: celebrating with you one more title in this club’s unbelievable history. It was a fantastic feeling: the season in the Premier League was not so good as we expected but, after going through some difficult moments, we never gave up and kept working to increase the club’s record. I think we have to give value to the fact that it took 12 years for the club to win again the FA Cup.
I take this opportunity to congratulate other Cup winners of the weekend: Bayern, Juventus, PSG, Braga, Barcelona… There were very exciting games all around Europe!
As you can imagine, this is the last blog’s entry of the season and I would like to thank you once again for your support, your commitment and your time to read these lines every Monday, wherever you are… I started this blog some years ago and it wouldn’t make sense to write it if it wasn’t for you. A million thanks for your support in this long and, at times, difficult season. I tried to pay you back with dedication and commitment to the team, always trying to give my best. I can highlight a few moments: for instance, I wore the armband of both Manchester United and Spain’s national team, I played almost 60 games, more than 100 in total as a Red Devil (I was very lucky not to get injured), I enjoyed great moments like this first title with the club, I learnt from the bad moments, and I felt your affection. It’s because of those things that I want to carry on and look forward to share more good moments with you.
It’s time for me to take a rest, switch off from football and recharge my batteries for the next season. I hope you have a great summer.
Hugs to all!