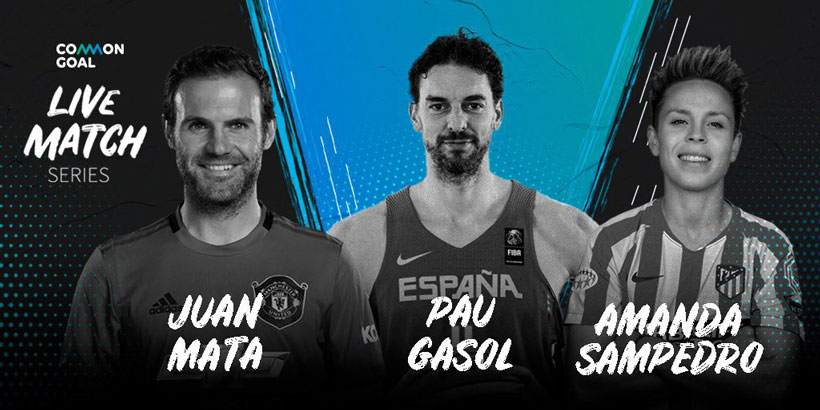 Common Goal has launched an initiative to confront the Coronavirus crisis at a global level. A fund through which players, institutions, other members of the football world and general public can gather to look for solutions as a team, as said by Juan Mata on the video supporting this initiative.

All the help is focused on “providing support to youngsters in danger of vulnerability or conflict,” Common Goal explains. UEFA’s Foundation for Children has been the first institution to join this fund, announcing their commitment to the project only 24 hours after its launching.

“We are now realizing how much we depend on each other. We will only beat Coronavirus and the next challenges if we remain united and working as a team. We need the help of Common Goal members and every other player or leaders of the football world to join and fight this crisis together,” said Juan Mata.

Let’s play our part in any way we can. @CommonGoalOrg have launched a fund to help those affected by Covid-19. We all have a #CommonGoal ⚽❤️? pic.twitter.com/aPVn9ozTvK

Within this initiative, Common Goal is fostering ‘Live Matches’, 45 minutes on Instagram to talk about the crisis from several points of view. Juan Mata has been the host of the two ‘Live Matches’ that have been celebrated until today. On the first of them, Juan Mata gathered players like Serge Gnabry and Mats Hummels, along with the OSCAR Foundation, from India, and the End Foundation, who are fighting against diseases of several countries in Africa.

In one hour the Common Goal Live Match will kick-off and I’ll be joining to chat with Juan Mata from 8.30PM CEST / 12.30PM PDT pic.twitter.com/c3p0hLXWUn

On the second one, in Spanish, Mata had Amanda Sampedro (female footballer), Juan Rey – from the Rey Juan Carlos Hospital of Móstoles – and Pau Gasol. The conversation was enriching. “Us, who have the luck of doing something we love with a good reward, have to help the people that haven’t had the same luck,” said the two time NBA champion, Champion of the World and European champion with the Spanish national team of Basketball.

“We encourage people to participate on these conversations. We’ve made a diverse but united group that shares the idea of working as a team, all of us, so we can fight this crisis and all the other challenges that might arise such as the fight for gender equality or climate change. It’s incredible to count with the help of Pau Gasol, Amanda and all the other guests. We hope that many other sportsmen and women might create their own ‘Live Matches’ of Common Goal,” said Mata.