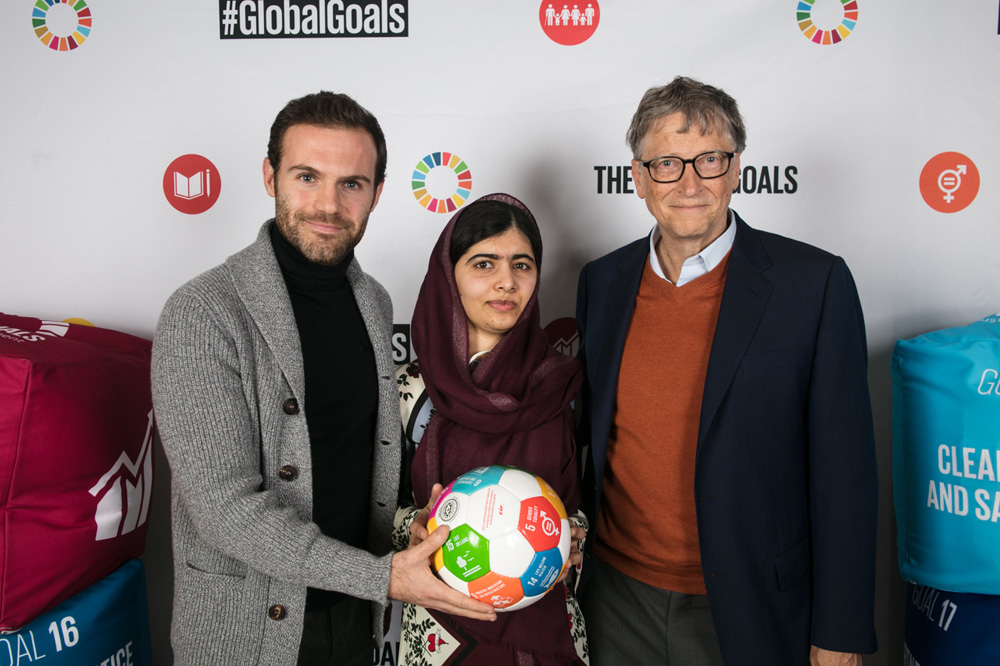 Six months after the launch, Manchester United star and Common Goal founder Jürgen Griesbeck have traveled to Davos to explore and discuss the movement’s contribution to the Global Goals.

Mata and Griesbeck have joined hundreds of global leaders from the worlds of politics, finance, diplomacy and business, including Kofi Annan, Narendra Modi, Christine Lagarde, and Bill Gates, along with heads of international organisations such as the World Bank and the United Nations, and well-known artists like Sir Elton John and Cate Blanchett.

The World Economic Forum’s 48th annual meeting is focused on the theme “Creating a shared future in a fractured world” and will take place in Davos to January 26th. Mata and Griesbeck hosted a Facebook Live Event on Common Goal and took part in the FaceToFace Davos Conversation Series alongside Academy Awards nominated screenwriter and Comic Relief founder Richard Curtis. In addition, they have held informal meetings with the leaders of various organisations.

Juan Mata explained that the opportunity to participate in the World Economic Forum is another milestone for the thriving movement: “To represent Common Goal in such a forum with the world’s leaders is an honour and a great opportunity to explain the evolution of the movement. It’s great that people are starting to understand football as a force for scalable social change and that this has a voice at the World Economic Forum. I’m very excited to connect with many people and organisations that share our commitment to improving the state of the world.”

Starting in August 2017 with the commitment of Juan Mata, Common Goal already boasts a squad of 36 people from 18 nationalities. From August to December 2017, Common Goal raised close to €500,000 that will be invested in high-impact local initiatives in the field of football for development. In 2018 the movement aims to generate over €2.5 million and take another step towards becoming a systemic part of the global football industry.

In Switzerland, Juan had planned to meet up with Malala Yousafzai, the 2014 Peace Nobel Prize at the age of 17: “This is a great opportunity to talk to someone who makes such an important things in Pakistan. It is great to get in contact with him as he’s such an inspiring person to many of us.”

Mata was able to chat with Erna Solberg, Norway’s Prime Minister, and Bill Gates, co-founder of Microsoft and president, along with his wife Melinda, of the Bill and Melinda Gates Foundation. The organization collaborates with projects in five continents to help the most disadvantaged sections of society in key areas such as health and education.

Juan is very optimistic with the future of Common Goal: “We didn’t expect something so surprising as has happened since August. It’s unbelievable that we reached to many organisations and collaborate with millions of people. Common Goal is not just for famous footballers. Many people have showed their commitment and phone us to ask. In the coming weeks, the funds of all who has committed to the cause will reach its projects.”

Jürgen Griesbeck emphasized the importance of a collective approach to tackling societal challenges: “We are in Davos to demonstrate the importance of team play to the future of society. Common Goal is a powerful example of how collective action can significantly contribute towards achieving the UN Sustainable Development Goals and the enabling role football can play.”

Common Goal is a global movement in which football players, managers and supporters pledge to donate at least 1% of their wages to community-based organisations championing social change through football. Common Goal is the creation of streetfootballworld, the international leader in football for good. Over the past 15 years, the organisation has built a global network of more than 120 local charities that use football as a tool to tackle social issues, ranging from gender equality in India, to peacebuilding in Colombia, to refugee integration in Germany.

Streetfootballworld supports Common Goal’s members by aligning their donations with football charities that generate the greatest impact around the world.