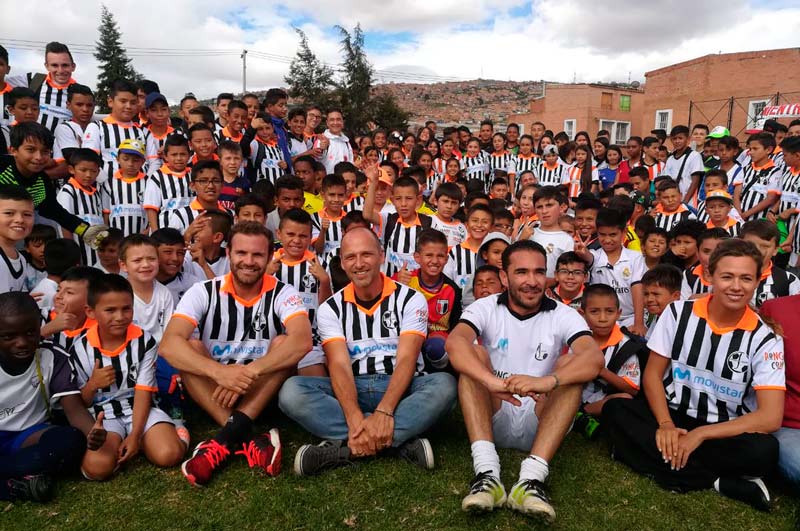 United’s player, the creator of the movement, is in Bogotá. Mata, that collaborates with the ‘Tiempo de Juego’ Foundation, has a campaign to raise funds until Sunday, June 24.

Juan has travelled to Colombia to support Common Goal‘s message in that country and to get first-hand knowledge of the ‘Tiempo de Juego’ Foundation, one of the organizations to which he donates 1% of his salary. The visit is part of a campaign to raise funds for Common Goal, which Juan started on Monday. In the same vein as the one made last week by the Nigerian international William Troost-Ekong, the Asturian player invites to join the ‘Team Juan Mata’. This special team will be formed by all those who donate money to organizations that seek equality between men and women through football. This campaign will be open until Sunday, June 24. Through these initiatives (the next will be launched by Giorgio Chiellini), it is expected to raise 250,000 euros in the coming weeks.

Hi everyone! I’m very excited to kick off this fundraiser for @CommonGoalOrg. For the next week, we are raising money for football for good organisations that champion gender equality! Join my team and let’s reach the goal! https://t.co/ODq1KarOqd #CommonGoal pic.twitter.com/0wSRGwBdjv

“It has been fantastic to see what the foundation is doing, with which we are collaborating through Common Goal. I had always been attracted to come to Colombia, and now to see that there are youngsters that improve their quality of life thanks to sports is gratifying,”said Juan. “Coming here lets me know that there are people working for the community, because in this world we still have things to improve. It is necessary to share the high income of football with the people who really need it, because they see sport as a way to improve as persons.”

Mata has participated, along with Jürgen Griesbeck -founder of Common Goal-, in an event that took place at the WeWork headquarters in Bogotá. The World Champion with the Spanish national team has shared his experience with journalists and opinion leaders with the aim of constructing a strategy to make players and organizations collaborate. Colombia, a key spot in the birth of Common Goal, counts with one representative of this movement: Nicole Reigner.

‘Tiempo de Juego’ Foundation fosters programs and football schools with two essential elements: The ‘Football for Peace’ methodology, as a tool to foster good coexistence, gender equality and Life abilities; and the ‘Instructors’ model, to promote the leadership of the youngsters for them to become prime movers and coordinators of the activities.

Common Goal, that will celebrate their anniversary soon, is based on a little commitment to foster a great change. The aim is to make the football industry donate at least 1% of its income to a group fund. This would be added to the donations that plenty of players are already making, as well as coaches and clubs. The money raised will be destined to social projects that use football to change the world, supporting the achievement of UN’s sustainable growth aims.