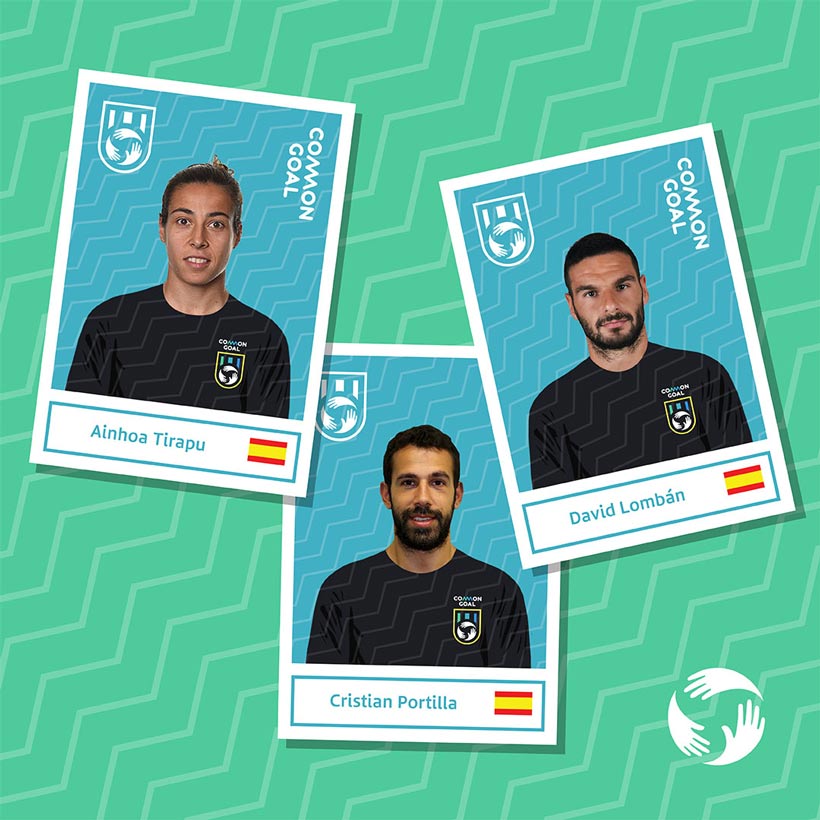 The biggest and most diverse club in football now boasts 46 players. Spanish players David Lombán (SD Eibar), Cristian Portilla (Ottawa Fury) and Ainhoa Tirapu (Athletic Club) have all joined Common Goal, the movement in which football players, male and female, from different leagues and levels throughout the world, unite in pledging a percentage of their salary to create positive and lasting social impact. #CommonGoal

Like Juan Mata, the first player to join the movement 8 months ago, all three Spaniards hail from the North of Spain and share the same vision as Manchester United’s Asturian star.

“For us joining Common Goal at the same time is very special. We are all very proud to be joining together with Juan to help the movement grow bigger and help transform the lives of even more people,” said Lombán, of La Liga club SD Eibar. The 30 year-old defender, also from Asturias, is the first La Liga player to join Juan Mata, Mats Hummels, Giorgio Chiellini, Shinji Kagawa and Alex Morgan in Common Goal. “I believe that Common Goal is an unstoppable movement which I want to be part of and I’m sure that more La Liga players will come forward,” said Lombán, a close friend of Juan Mata, since the two players coincided in the Real Oviedo youth academy.

Attacking midfielder Cristian Portilla was also a teammate of Mata, in his case in the youth teams of the Spanish National team. Born in Santander, Portilla played in six different countries before settling in Canada. “I’ve been through all kinds of situations during my career and this has helped me have a really broad perspective about the enormous power that football has throughout the world,” said Portilla. “This is a sport that has a unique potential to change the world and because of this I’m delighted to join the Common Goal team and form part of the movement.”

And last, but definitely not least, is @OttawaFuryFC midfielder @Portilla18! Thrilled to have you on the team, Cristian, let’s get to work! #CommonGoal #jointheteam pic.twitter.com/SmJZUzWgit

The goalkeeper Ainhoa Tirapu, capped 46 times by Spain, is also from the North of Spain. Born in Pamplona, Tirapu has played over 300 matches for Athletic Club (Bilbao). With a Masters Degree in Chemistry and Toxicology, Tirapu combines her elite playing career with a job in sports store. “I’m joining this project with the aim to bring all the emotion and values that football generates to every corner of the world. I hope that soon there will be many more of us teaming up with these community organisations that are using the game as a tool for good”.

“David is, with no doubt, one of the best people that I had the chance to meet thanks to football,” Juan Mata said. “It was him who directly asked me about Common Goal and it is an honour to have him on the team. It is an important day for us because we can announce his engagement together with Cristian, who I met in the Spanish National team, and Ainhoa, a recognized international goalkeeper; they all bring different perspectives to Common Goal”.

Since the launch of Common Goal in August 2017, 46 players have joined the movement, generating almost half a million Euros to advance social change through the use of football around the world.

Common Goal is charging quickly toward the World Cup, where the organisation will see upwards of 8 players competing for the world’s most coveted trophy. The movement also has several big announcements on the horizon, including more players joining, opportunities for fans and businesses to play their part, and content surrounding the impact the movement is already having on the ground. Stay tuned.

Common Goal is a global movement in which the football community pledges (a minimum of 1%) of its earnings to football-for-good organizations that use the game to advance the Global Goals.

Common Goal is the creation of streetfootballworld, the international leader in football for good. Over the past 15 years, the organisation has assembled a global network of more 120 football-based organisations that use football as a tool to tackle social issues, ranging from gender equality in India to peacebuilding in Colombia to refugee integration in Germany.