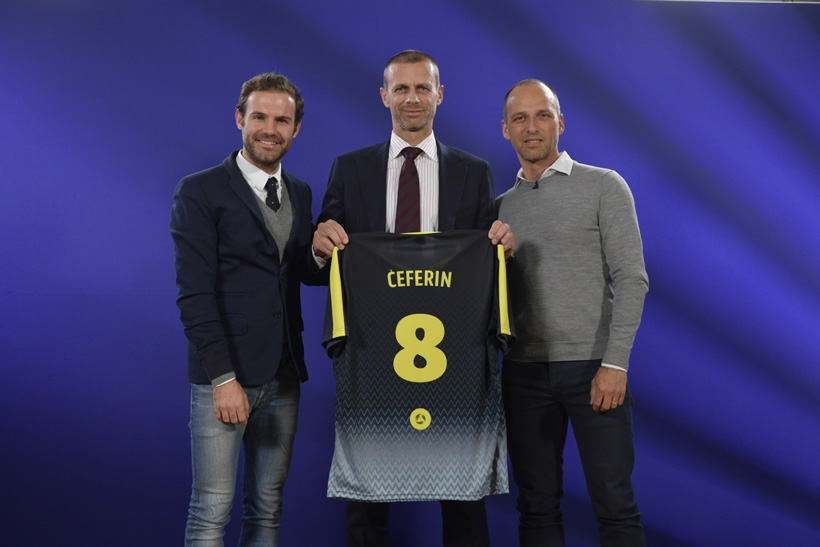 Aleksander Čeferin today announced that he would pledge one per cent of his salary to Common Goal during a meeting held at the House of European Football in Switzerland, with Common Goal co-founders Juan Mata and Jürgen Griesbeck.

Spain international and Manchester United FC midfielder Juan Mata was the first player to donate 1% of his wages to the Common Goal movement, which funds high-impact football charities from all over the world.

Commenting on his decision to support Common Goal, UEFA President Aleksander Čeferin said: “I firmly believe that football has the power to change the world and I was inspired by Juan Mata to join the Common Goal movement. It’s great to see a player leading this movement because footballers have benefitted greatly from football and this way they can give something back. I call upon everyone in the football family – players, coaches, clubs and leagues – to show they care about social responsibility and donate to causes that they believe in.”

UEFA President Aleksander Čeferin: “I was inspired by @juanmata8 to join #CommonGoal. It’s great to see a player leading this movement” ⚽❤? pic.twitter.com/kAhofo7YVT

Following on from the UEFA President, Juan Mata added: “I deeply thank Aleksander for the trust he puts in Common Goal and I can only applaud his gesture and agree with his strong conviction that football can help shape a better world. He is the first football leader to join our cause and I truly hope that many will follow his example.”

An historic day for football. Thanks Aleksander for joining the movement. #CommonGoal ⚽️♥️?

Jürgen Griesbeck, founder of streetfootballworld, concluded: “Football aligned behind a shared vision for good can be incredibly impactful. If everyone gets behind Common Goal, in one way or another, we could change the lives of tens of millions of people across the globe, thanks to a common passion for the game.”

Common Goal is the creation of streetfootballworld, an NGO which has developed a global network of more than 120 local charities that use football as a tool to tackle social issues, ranging from gender equality in India to peacebuilding in Colombia and refugee integration in Germany.

Common Goal is a movement of football players, managers and supporters who share a mission to change the game for good. More than thirty players – including Mats Hummels, Giorgio Chiellini,  Alex Morgan, Megan Rapinoe, Vero Boquete, Serge Gnabry and Shinji Kagawa – as well as coach Julian Nagelsmann – have already publicly announced their support for the movement over the last few weeks.

? “Football has the power to change the world.” ?

Underlining the UEFA President’s commitment to sport aiding society, this week he was also elected as President of the UEFA Foundation for Children. The foundation, established in 2015, aims to help children and safeguard their rights.