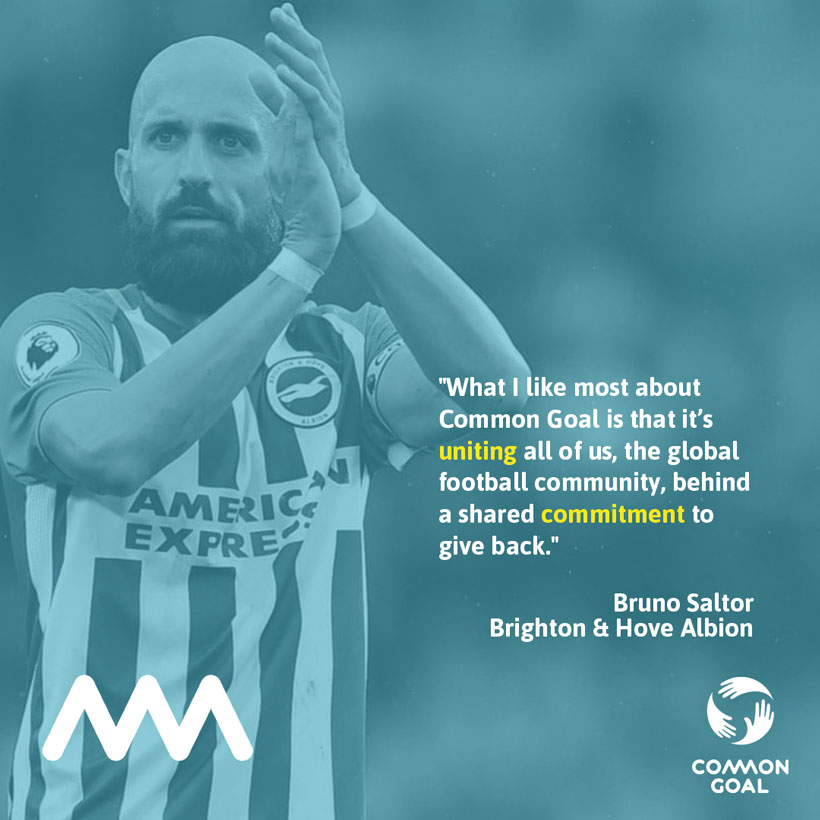 Brighton & Hove Albion captain joins Juan Mata in making the pledge. At least one player will be unveiled every day until November 29 #CommonGoal

Bruno Saltor has become the latest Premier League player to join Common Goal, with the defender pledging to donate at least 1% of his Brighton & Hove Albion wage to high-impact football charities around the world.

In making the pledge, the 37 year-old joins his Spanish compatriot Juan Mata—who he will compete against when Brighton play away at Manchester United on Saturday. Common Goal’s roster now boasts a total of 24 members from 10 countries, including fellow Premier League players Alfie Mawson (Swansea) and Charlie Daniels (Bournemouth).

Read more about Bruno’s pledge to donate a minimum of 1% of his wage towards a collective fund, as part of the @CommonGoalOrg initiative. ???? #BHAFC https://t.co/zKOtPKCq70 pic.twitter.com/Edwle1wtFS

“Last season, I was fortunate enough to be part of a Brighton team that was promoted to the Premier League for the first time in our history,” recalled Bruno, who captained the side to that accomplishment. “It was a special moment that united our entire community, and a powerful reminder of football’s capacity to create magic in our lives. What I like most about Common Goal is that it taps into this same magic to change the world for good. It’s about uniting all of us, the global football community, behind a shared commitment to give back.”

“Many of us now want to leave a mark”

Bruno, whose senior career kicked-off at Espanyol in 1999, said he was pleased to see a growing appetite to give back amongst his peers. “Over the past few years, I think we’ve increasingly come to understand that, as players, we have a great opportunity to make a meaningful difference to the world,” he explained. “Many of us now want to leave a mark that goes beyond our achievements on the pitch, and Common Goal basically takes this positive attitude and makes it as part of a unified movement.”

A very special player joins @CommonGoalOrg today. The perfect professional, a great friend and one of the best persons I’ve met thanks to football. Welcome Bruno!! See you on Saturday ?. #CommonGoal ⚽❤? pic.twitter.com/uTegPLEljH

Mata was quick to welcome his newest teammate to the movement: “I may be playing against Bruno on Saturday, but I am proud to call him a Common Goal teammate and look forward to working with him to grow the movement further in the UK, Spain and beyond. Bruno is a wonderful character and a great leader. He’s going to slot into Common Goal very nicely and I’m extremely thankful to have him on-board.”

Bruno is the second Common Goal signing to be unveiled in the space of two days, following on from VfL Wolfsburg’s Daniel Didavi yesterday. Common Goal founder Jürgen Griesbeck has said that at least one player will be unveiled every day until November 29, at which point there will be a ‘huge announcement’ and ‘landmark moment’ for the movement.

Common Goal is a global movement in which football players and managers pledge to donate at least 1% of their wages to high-impact football charities.

It is the creation of streetfootballworld, the international leader in football for good. Over the past 15 years, the organisation has assembled a global network of more 120 local charities that use football as a tool to tackle social issues, ranging from gender equality in India to peacebuilding in Colombia to refugee integration in Germany.