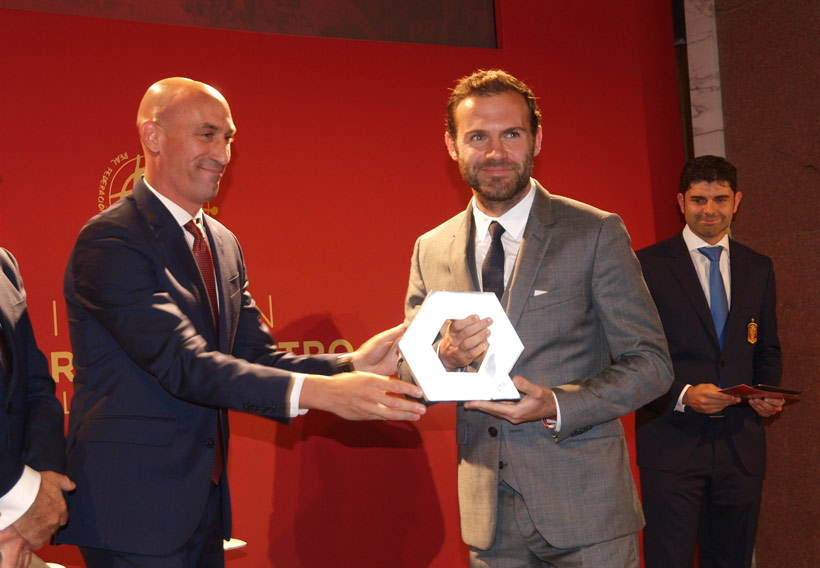 Juan Mata received the Enrique Castro ‘Quini’ Award in a beautiful act in Gijón. On their first edition, the award recognizes the commitment of the Spanish international with Common Goal. Luis Rubiales, president of the RFEF, was the one in charge of giving the award to Juan. The ‘Escuela de Fútbol de Mareo’ was also awarded.

Juan Mata was the protagonist on the I edition of the Enrique Castro ‘Quini’ Awards. In an emotional act celebrated at the University of Gijón, Luis Rubiales, president of the Spanish Federation of Football, gave the award and diploma to the Manchester United player. A video was emitted and Mata pronounced a speech of gratitude in front of the auditorium.

“It’s a privilege to be in Asturias and receiving an award with the name of such a special person like Quini,” he said before speaking about Common Goal: “We are more than 100 members and we will grow more. We have the aim of incorporating the whole football world to donate the 1 % of their income to social causes.”

This distinction to the Asturian player, given by the Spanish Federation, was decided unanimously in the national and international category of the past 31st of July. Juan Mata’s commitment to Common Goal has been decisive for winning this award. In tribute to the name of the award, the gala was celebrated in Gijón, before the match between Spain and Faroe Islands at El Molinón.

Mata’s decisive contribution to the foundation and Common Goal’s expansion (an institution that gathers persons and companies related to football to donate 1% of their income to a central fund that then distributes the money among several projects that use football as a tool to help the world) are the reasons why Mata has received the Reina Sofía Award (one of the National Sports Awards). Also, he has been able to explain the project in events such as the World Economic Forum and the World Football Summit.

“All Spanish football is proud of you. This 1% is helping plenty of boys and girls. I’m very happy that this project has been developed by an Asturian, Spanish and International player,” said Luis Rubiales.

The ‘Escuela de Fútbol de Mareo’ was the other protagonist of the event. Javier Martínez, president of the School, received the corresponding award of the Asturian category. “Quini was always in love of ‘Mareo’. He has been an example for all of us and that’s why this award is so important for us,” said Javier.

The memory of Quini was constant. Before the awards they projected a video with images of the player, and Javier Gómez, spokesman of the family and director of the Enrique Castro ‘Quini’ Foundation, said a couple of words to the presents.