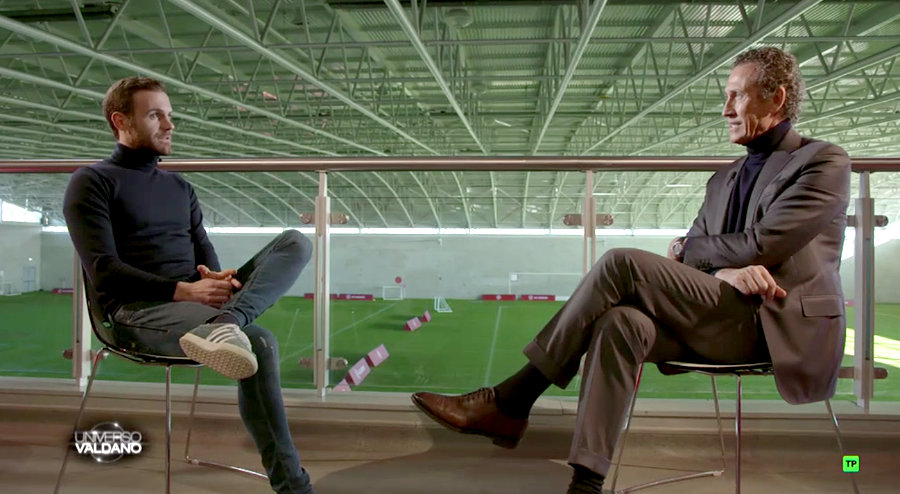 The Manchester United player had a conversation with Jorge Valdano about football, social responsibility -Common Goal-, family and future plans. “It is important that a player takes advantage of his position to send positive messages”, he said.

Juan Mata was the protagonist of ‘Universo Valdano’, the Movistar + programme in which Jorge Valdano has a chat with a national or international reference player. Jorge went all the way to Manchester to meet Juan, and they talked about several things.

They talked about Mata’s path since he was a kid to when he became a professional. He said that regarding English football he still is amazed by how the English fans are, even during the team’s bad moments: “During my first year at United we didn’t do a good season and at the end we had to turn the situation round at Old Trafford”. Regarding the national team, he said he was proud of being part of an unforgettable group, a squad that became Champions of the World and of Europe: “I’m not only proud of winning, I’m proud of that group, how we all were”.

On a dialogue between two persons that are known for their inquisitiveness beyond football, there had to be reflexions on the youngsters (“It’s complicated to reach young people that prefer talking about celebrations, hair cuts or boot brands in stead of speaking about the game itself”) or the role of players regarding social life (“It’s much more important than before, we need to take advantage of that position to send positive messages”). In this sense, Juan talked about his implication towards Common Goal.

Beyond football, the international Spaniard spoke about some anecdotes with his family. He is very linked to his mother -the one who says things he doesn’t want to hear-, his father -former football player that has accompanied him throughout his career-, and his sister, that has been a very positive influence for him.

Mata is focused on finishing his Universitary studies, although he doesn’t know what will be of him in the future. He doesn’t seem to have clear the idea of becoming a coach: “It’s a very exposed person”.