Mata reaches 50 goals in yet another excellent performance 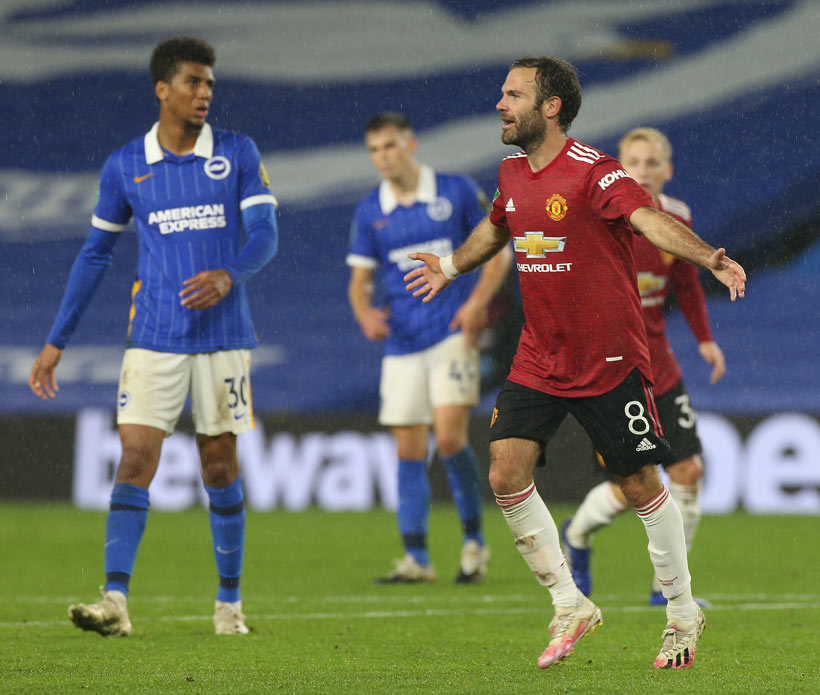 Manchester United reached the Carabao Cup quarter-finals after beating Brighton 0-3. In addition to the goal, Juan assisted McTominay in the 0-1 and was awarded MVP of the match.

? Watch the best bits from another win on the road, as goals from @McTominay10, @JuanMata8 and @PaulPogba fired us through to the #CarabaoCup quarter-finals…#MUFC pic.twitter.com/xu0RRN14Ge

Manchester United, with an outstanding performance from Juan Mata, secured a place in the last 8 of the Carabao Cup. The Red Devils, as they did on Saturday in the Premier League, beat Brighton & Hove Albion, although this time with more solvency (0-3). The tie served for Juan to reach an exceptional figure: he scored his 50th goal with the United jersey.

⚽️ Juan Mata has scored his 50th goal for @ManUtd – since he joined the club in January 2014, only Anthony Martial (71) and Marcus Rashford (69) have scored more pic.twitter.com/RelF5711ad

The Asturian’s goal, in the 73rd minute –after a lovely flick from Van de Beek-, was the moment supreme of his participation in the game. He also gave McTominay the 0-1 assist after a free-kick (minute 44), generated four chances for his teammates and exceeded 90% accuracy in the pass. He also forced a yellow card in the first half. For all this, he was chosen MVP.

The 50-goal figure comes at a good time for Mata, who has five goals and eight assists in the last 15 games in which he has started for United. “I feel good, as always, physically and mentally,” said Juan, in a post-match interview with Sky Sports. “I’m hungry, I have still passion for the game and I feel I have still a lot of football in my legs and in my mind. I am enjoying football as much as ever.”

Pogba, with an excellent direct free-kick, scored the 0-3 (minute 80) and sealed the participation in the last 8. Manchester United return to the domestic competition next Sunday, against Mourinho’s Tottenham at Old Trafford.