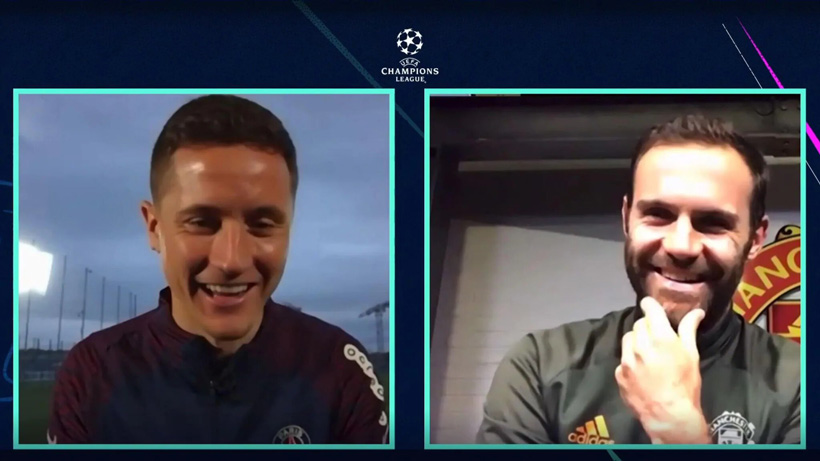 The former team-mates let UEFA.com in on their pre-match video call. They will meet again when Paris come to Old Trafford on Matchday 5. The two midfielders talked old times, and looked forward to spending more time together in the future.

Ander Herrera: How are you doing, my friend?

Herrera: No, we’re training this afternoon.

Mata: OK, you’ve got training later on. Have you been to the gym today, like you always do, to work on that body of yours?

Herrera: I’m going to go later on to work on the old chest muscles.

On their United glory days

Herrera: The games that are most etched into my mind, and I think the same goes for you too, Juan, are the ones that saw us lift silverware, because trophies are always important and, at Manchester United. Obviously, the [2017 Europa League] final against Ajax in Sweden…

Herrera: I didn’t want to say it to show a bit of humility, but that’s right, I’ve got the trophy at home. That European trophy in Sweden was very important for United and was the first piece of [European] silverware in a long time and since the win in Moscow if I’m not mistaken, right, Juan? Since the [UEFA] Champions League win in Moscow against Chelsea.

Herrera: We were together for five years, and in that time, we always fared pretty well against Liverpool. We won two or three times at Anfield, if I remember right. We never lost at home against Liverpool in the league and not even in the [UEFA] Europa League, because I think it ended in a draw when they knocked us out, right?

Mata: We lost to them in the Europa League at their place, but not at home, right?

On Herrera’s move from United to Paris

Mata: We miss you here.

Herrera: I also really miss you guys and you know it.

Mata: I think that the city is massively football mad. You go down the street and the fans either support United or City. It’s a city that lives and breathes football every day of the year.

Herrera: I really enjoyed my time in Manchester because of the people of Manchester. They were fun-loving people who despite the climate, which is tough, have always got a smile on their faces and always try to pick you up.

Mata: What do you miss about Manchester?

Herrera: I obviously miss my friends, like you guys. The likes of Eric [Bailly], Marcos [Rojo], the staff at the club. When we had visitors over from Spain and the three of us – David [de Gea], you and I – got together with all of them and talked about anything and everything apart from football. I miss those good times that we shared and there’ll obviously be many more of them to come.

Mata: We lived on the same street, and whenever one of us had friends over, we all got together to have dinner, or to watch a Spanish league match together, to watch your beloved Real Zaragoza, to watch [Real] Oviedo.

Herrera: Absolutely. And David [de Gea], we can’t forget about David who was also such an important part of our time together in Manchester. He arrived there before us. He also helped us to settle in when we first arrived, and we went on to spend a lot of time together.

Mata: Life in Paris must be incredible because I really love that city.

Herrera: I really loved my first year here. It’s such a shame that the pandemic happened. The pandemic is really doing my head in because I can’t really enjoy Paris as I would like to. Luckily, I have a few more years left on my contract here.

On their Matchday 1 meeting in Paris

Mata: The last time we met was at that game, obviously, at the Parc des Princes. It was a very positive game for us, but it wasn’t as positive for you. At the end, Marcus [Rashford’s] goal allowed us to pick up those three important points. But, on a personal level, I saw you performed well, too. You always do your job. But we were good. We were good that day, weren’t we?

Herrera: It’s true that you were the better side in general, but David [de Gea] stepped up in those pivotal moments of the game. Because we had two or three good chances. One from [Layvin] Kurzawa in the first half. Another one from Ángel [Di María] also in the first half. Then Kylian [Mbappé’s] shot in the second half. I always feel very happy whenever David saves so many shots, but that day it pissed me off.

Mata: Do you know what I feel sorry about when I come to think of it? That you’re going to come to Manchester and the stadium will not be full, there won’t be any fans to welcome you back again. It’s a shame. You would have been full of it.

Herrera: You always dream of those moments, especially in places where you’ve given it your all. For example, when we travelled to London to play Chelsea, I remember all the affection people had for you there. And I have the same feeling about Manchester, so I was really keen on saying thanks again to the people there for the five years we experienced together, but it won’t happen.

Herrera: I hope this [pandemic] ends and that [we get] the vaccine and we can meet. Either I go to Manchester or you come to Paris to have a laugh and we can go out and have dinner together and hug one another [again].

Mata: You’re not a guy who likes to relax, to meditate. Not that kind of guy.

Herrera: I like to chat. At the end of the day, we only live once. Let’s go and share things and make the most of things and learn from everyone.

Mata: Your smartphone is burning because of all the video calls, right?

Herrera: That’s right. But there’s time for everything. There’s time for relaxing, too. But listen, we’re already 31 or 32 years old. I’m not sure if we’ll ever meet again on the pitch.

Mata: Right, but we could meet as coaches, couldn’t we? Old Trafford’s bench would suit you really well.

Herrera: You still want to be my assistant, right?