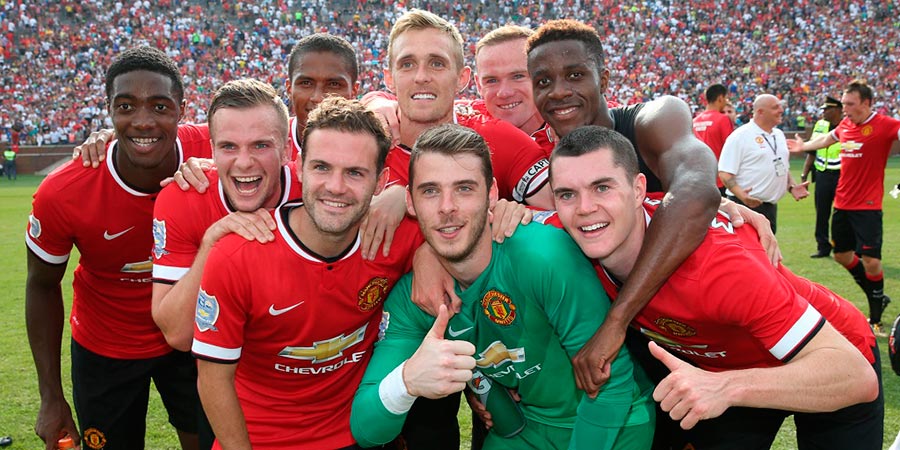 Hi everyone,
As I wrote last week, the team was ready to work hard and keep going in order to overcome our tough start. That sacrifice was shown against West Ham and the three points make us look at the table in a different way now. Once again, the support of Old Trafford was a big help. Our goal now is to become more consistent and to keep working on our football style to add more points. The more we enjoy on the pitch, the more we will make you enjoy our games. The team aims to keep growing throughout the entire season and we are sticking together to achieve that.
It was a special day for David de Gea, who has reached 100 Premier League games. He is one of the most skilled goalkeepers I’ve ever seen so I know you will play many more than 100, my friend. It was also unforgettable for Paddy McNair. Making a debut with Manchester United in Old Trafford being just 19 is amazing, and I am sure he will always remember this day. It’s good for the young players to see that they can fit in the first team. It has always happened in this club and it’s a good tradition to keep. In my opinion, Paddy has a bright future ahead.
We are already thinking about the match against Everton next Sunday. Last season we couldn’t win, but I believe it will be different this time and we will be able to get the three points in our stadium.
This weekend I’ve been watching quite a few hours of sports on TV, aside from European football. In cycling, the Road World Championships took place in Ponferrada, Spain. The road race was very exciting. Congratulations to the winner Kwiatkowski, from Poland, and to my Spanish countryman, Alejandro Valverde, who finished third and won his sixth medal in the World Championships. He races from February to September -what a great competitor he is. And the same about Sir Bradley Wiggings, who last Wednesday claimed the world time trial title to add to his fantastic record.
We enjoyed good football games in la Liga this weekend, with three wins of Real Madrid, Barcelona and Atlético thanks to their big attacking power. All three teams have plenty of quality and they are back to the main spots of the table. Valencia is up there with them following a draw in Anoeta. Despite Canales goal, they added one point to remain unbeaten.
I also followed the Ryder Cup, one of the biggest events in the sports calendar. I remember Rory’s victory, McDowell’s exciting match, Sergio García’s comeback and Donaldson’s final putt as the best moments of Sunday. Being European, I am pleased that we retained the trophy and extended the good streak of the last decade.
Have a nice week. I hope you start next Monday in a good mood as well ;-). Thank you all!
Hugs,