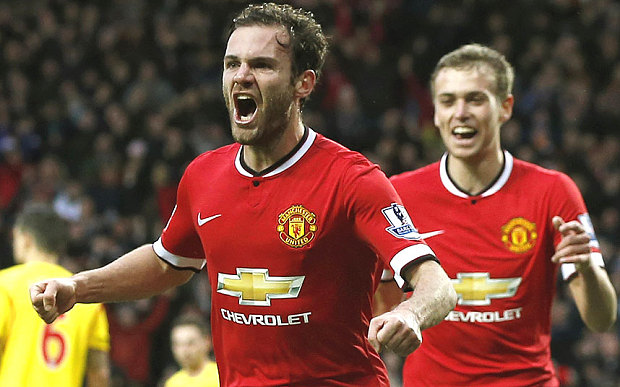 A special day in the Theatre of Dreams

To tell the truth, this is not the usual blog entry. I got home a while ago and I still keep a smile on my face. This Sunday in Old Trafford has been a day to remember. For Manchester United, the games against Liverpool are always special. That circumstance, added to our good run of results in the last few games, were enough to create a spectacular atmosphere inside the stadium.

Believe me, when you are playing football in a place like Old Trafford and the crowd starts roaring you do feel it. The support of the United fans during my time here has been amazing, something really gratifying, but this Sunday was special. This 3-0 strengthens our position at the top side of the table; it makes us feel strong. Since the moment I stepped onto the pitch from the tunnel to the very last minute of the match, the atmosphere was incredible. I feel very lucky to be able to participate in this kind of games, which is what every footballer wants.

Personally, I was fortunate to score again. To be honest, I watched the footage and it’s true that I’m offside after Robin’s header. That is something you don’t realise when you are on the pitch. Anyway, we scored two more goals and that reinforces our victory.

And we won, among other things, thanks to the ‘Man of the Match’ David de Gea, who has had yet another great performance. He is in top form. Everybody’s praising him and now we have to keep working so we don’t need so many saves from him in the next few games; we have to get better in that regard. David gives us complete confidence. Liverpool created chances and they didn’t score because of him.

But I don’t want to focus only on the praise; the team has to keep working as we did in the last few weeks. That’s why we are improving. In just a few days we play against Aston Villa in a stadium with a very good atmosphere, where winning is always tough, and right after that we will be in Christmas. We have to maintain this positive streak and try to get as many points as possible this month.

Talking now about Spain, this weekend I was able to follow several games since we didn’t play very late. Real Madrid won again (20 times in a row already). This time in Almería with more goals from Cristiano. When you check his stats it looks as if we were at the end of the season instead of the first half. On Saturday, Barcelona drew in Getafe –they are hard to beat at home– and Valencia won 3-0 against Rayo. I also watched a bit of Atlético vs Villarreal, and the Basque derby, very intense as always and also rainy.

Before I say goodbye I would like to highlight the club’s partnership with Unicef, an organization I use to cooperate with. Unicef’s work is really commendable: it helps millions of boys and girls all over the world, I encourage you to collaborate. This is a good time to be with the ones you love but also to be aware of those who struggle in life. I hope the next year is even better than this one. But there are still a few days left in 2014… Let’s make the most of them 😉

Thank you once again for your messages, I read them all! Have a nice week! Hugs,