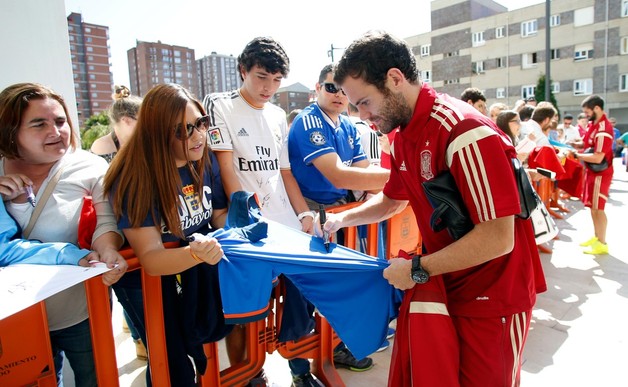 Today I’m writing from Spain. We are about to take a flight to Skopje, the capital of Macedonia. As you know, this is an international break for the European Championship qualifiers and now we face the second of these two games. The first one went quite well: a 2-0 victory against Slovakia, a team that had won everything since may 2004. Besides, it happened in Oviedo, my home.

I didn’t have the chance to play, but having so much affection from so many people in the last few days has made me really happy.

It’s been very special for me, no doubt about it. I can’t believe that a few years ago I was a kid playing football just for fun at my school, “Gesta I”, and now I was passing by the same place on the bus with the national team of Spain. And there are plenty of stories like this one, because I have seen Oviedo from a totally different perspective that the one I was used to… Whims of fate, dreams made true…

Also, I could spend time with my family and friends. That was the best part of my visit to Asturias! So, it’s been a very special trip, going back to my background and also getting an important win in a good game, with Oviedo supporting the team. Thanks to all!

Now we must finish the job against Macedonia. They are not in a good position in the group, but I’m sure it’s going to be a tough team to beat. It won’t be easy to win in Skopje. And we will keep an eye on the other game between Ukraine and Slovakia, because the score can have a big impact on the group.

Also, I would like to congratulate England for becoming the first team already qualified for the Euro 2016. They have good players in every line and I’m sure they’re going to be one of the main rivals in France. Special congrats to my team-mate Wayne Rooney for equalling Sir Bobby Charlton as England’s leading all-time goalscorer. Wayne is one of the best players I’ve ever had as a team-mate, and I’m sure he’s going to set a record very difficult to beat in the future…

In general, the national teams in the British Islands are doing very well in the qualifiers. Wales and Northern Ireland are the leaders of their respective groups, whereas Scotland is in a more complicated situation after being defeated in Georgia.

In basketball, the European Championship has already started. Spain hasn’t had the best possible start, but I’m sure this group of top players will find the way to come back and fight for the medals one more time. Serbia is always tough and competitive, as any other team in the Balkan countries. The best of luck to the Spanish team!

It’s time to sign off, we are taking off in a little while! I hope to go back to Manchester with two wins out of two and to seal our passport to the Euro 2016; we are the defending champions. Thank you for your support. There is a big game ahead, the next weekend… 😉

PS: From now on you will first find my weekly posts on Kicca. I’m excited to join it and I’m looking forward to telling you good stories around here.