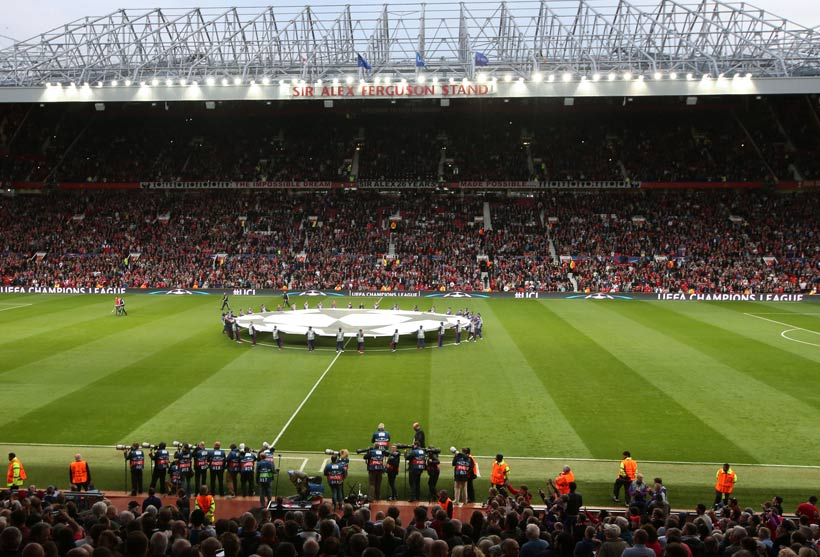 Champions League football is back at Old Trafford!

A very special week is starting this Monday. The group stage of the Champions League kicks off and we are back there, with the best teams in Europe, the place where Manchester United should always be. We missed it a little bit last season –although we made the most of our year in the Europa League 😉 with that night in Stockholm–, and now it’s time to compete at the highest level. We will need to tackle the difficulties that playing in four competitions imply, and prove that we have a deep squad full of skilled and motivated players. There are a lot of games scheduled for this month and we will need the help of every single player in order to win as many games as possible.

Last Saturday we let two points slipped away from us, the first two in the Premier League, in the (always) tough visit to Stoke. We have to give credit to the opponent because they made things very difficult for us, as they do every year, by reducing spaces and also attacking with danger; however, we showed character and in the last few minutes we really felt that the victory was close. Besides, it was my 150th game with United, something I’m very proud of, and I hope I can play many more! As I said, we couldn’t celebrate it with the three points but the team morale is still very good ahead of the game this coming Tuesday. We’re still on top of the table with 10 points out of 12, which is not bad.

Now it’s time to focus on the Champions League, which is back at Old Trafford. We’re really looking forward to listening again to that nice music before the game, and we’re sure the atmosphere in the stadium is going to be amazing, as it always is during the big European nights. We play against Basel, who won the last league in Switzerland with authority. They did play in the Champions League last season and it would be a big mistake to underestimate them. I’ve already played against them in the past and I suffered their carefree, offensive football style. We have to be focused because it would be very important to start with a win, even more considering that we have to play Everton, a tough opponent, on the weekend. They’ve just suffered a tough defeat against Tottenham, but they have made very good signings and of course they have a player like Wayne Rooney. I hope Old Trafford will welcome him as he deserves. It will be weird to see Wayne playing with a different shirt, to be honest, but this is the decision he made last summer and we wish him the best of luck.

Meanwhile in Spain we had the Asturias derby between Oviedo and Sporting in the Second Division, 14 years after the last official game between them. Everybody was looking forward to it, as you can imagine. Aside from some incidents that have to be condemned, there’s always that big rivalry that I remember since I was a kid. I hope we can enjoy a good game full of sportsmanship in the second leg of the season. The draw was a fair result, Oviedo played better as the minutes went by and they were the best team in the second half. Asturias is now waiting for the second game, at the Carlos Tartiere!

In La Liga, Barcelona is on top after a big win in the derby against Espanyol, and Real Madrid only got one point with Levante, a team promoted this year which is showing big consistency in these first few weeks. In the goalless draw between Valencia and Atletico, Andreas Pereira made his debut with the locals. I wish him the best and I’m sure that he will enjoy a lot the team and the city.

La Vuelta a España finished in Madrid and I’d like to congratulate two riders: Froome, the final winner, and Contador, for his incredible way to retire from professional cycling, with a brave win in Angliru, a very, very tough climb in Asturias. Congratulations, Alberto, for keeping that fighting spirit until the end, for all the things you have achieved and for bringing so many fans in our country to the world of cycling.

And talking about great Spanish sportsmen, this week Garbiñe Muguruza and Rafael Nadal stand together as the number 1 players in tennis. They make all of us very proud. I really love tennis and I use to practice when I’m on holidays. There aren’t enough words to describe Rafa. He’s simply a phenomenal player, and a role model for all of us.

A few hours before Nadal’s match, in the EuroBasket, Spain’s basketball team defeated Turkey, one of the host countries, after an even game and we’re already focused on the last eight of the tournament. We have to enjoy this generation of players. Over the last few years, Spain has had an amazing ability to produce sports talent in almost every discipline. This is something we should be really proud of!

PS: This week we will bring you very good news regarding the Common Goal project. I’m sure you’re going to love them 😉