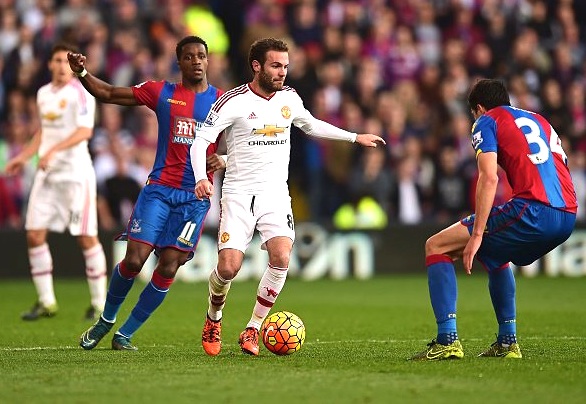 A week ago, after two draws, I was telling you here that we had to win again. Unfortunately, this Monday I keep longing for the same thing. After two more draws we are forced to win as soon as possible, starting with our next game in the Champions League.

The first draw in the Capital One Cup was the worst one because it was followed by a defeat in the penalty shootout. Against Middlesbrough it was one of those games where the team visiting Old Trafford tries to defend well, obstruct our game and rely on any chance they may have to score. It worked well for them because they took the game to the penalties and they were better than us in the shootout. We had some chances, especially in the last few minutes, but we know we must be more efficient and accurate when making and finishing our plays.

The draw in the Premier League against Crystal Palace was different. They are a team that knows how to play their cards. They did good pressing at the start to complicate our moves, and they created some chances especially in the first few minutes. My feeling was that, after a difficult start, we were getting more and more into the game, finding spaces between the lines and controlling it by half time. Yet at the start of the second half they did good pressing again and played long balls that put us in some trouble. We weren’t able to create good chances. We need to get better in that aspect of the game because I think we have the players to do that. I’m sure that the goals will come soon and, with them, the good results.

Now it’s time to keep training and getting ready for the upcoming fixtures. The calendar is full. We have two consecutive games in Old Trafford and the one this Tuesday is almost a final. The stats say that Manchester United has never defeated a Russian team at home, so it’s time for that first victory. CSKA have the same points than us, therefore it is vital to win if we want to top our group. With the support of our fans we hope to enjoy another great Champions League night in the Theatre of Dreams.

After that we will play against West Brom in the Premier League. This is yet another game that we have to win in order to stay up there on the table and leave for the international break with good feelings. West Brom has got more points away than at home this season, so we will have to pay attention to that. It will be nice to meet friends like Anders Lindegaard, Fletcher, Evans and Salomón Rondón, who is having a good streak…

The Valencian derby was played in Spain this weekend. It brings me good memories because I was lucky to score in some of them and it’s always a special game in the city. Valencia won, as it was expected, although Levante had a better start. I hope this win is the beginning of a good streak for my former team…

Real Madrid and Barcelona won without much trouble, whereas Atlético dropped two points against Deportivo, a team that is having a good start this season. However, once again I have to emphasise Celta and Villarreal because they both won difficult games and they are playing very well. I’m pleased to see more teams playing good football and giving trouble to the big clubs.

I also want to congratulate New Zealand for winning the Rugby World Cup in Twickenham. I couldn’t watch the final, as you know, but I have seen some highlights and I am impressed by the way the All Blacks and the rest of the big rugby teams combine intensity, intuition and strategy.

I hope you have had a nice Halloween night this weekend. I have to thank you because we are more and more people on my YouTube channel, and also on my social networks. We are working to bring you more surprises shortly.