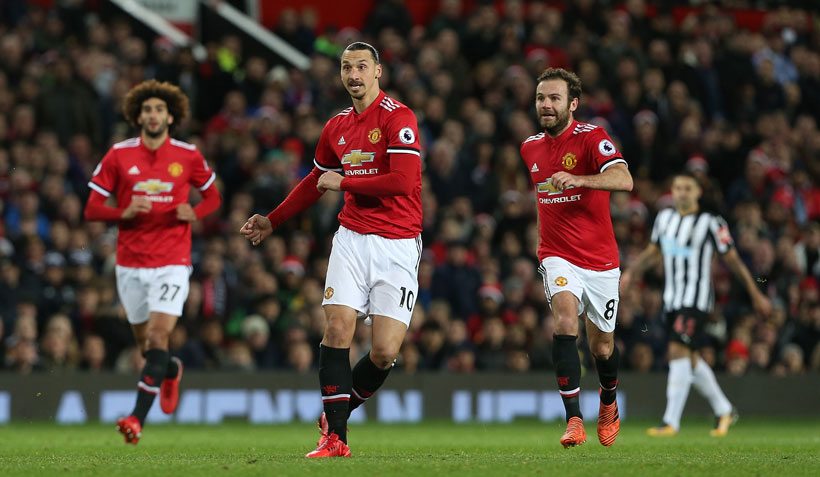 The character of a comeback

Last Saturday was a happy start of a marathon of fixtures that will take us straight to Christmas, a series of games that will demand the maximum effort from us. With that in mind, being able to recover players such as Paul, Ibra and Marcos is great news for the team, for we will need the full squad in order to show the best performance in every competition, same as we’ve been doing so far. It was great to see them back on the pitch, especially Marcos and Ibra after such a long time away. They have worked really hard to be back and they deserve to have a great season. I’m sure both of them will help us a lot in the coming months.

The truth is, last Saturday’s win was special because it was the first comeback of the season. So far, in most of the games we had scored first and won. Against Newcastle, though, we conceded a goal and then we had to come back, and the way we did it was the best proof of the team’s ambition and character. Newcastle is a tough opponent, a well-crafted team with good players, but we were able to defeat them in a complete performance from the whole team.

Now we have three games in just seven days against sides that won’t give us a break. First of all we travel to Switzerland to play Basel in the Champions League. They are second in the group with the same points of CSKA, which gives an idea of the importance of this game for them, but also for us: we are Manchester United and we are committed to try to win every single game, so I’m sure we will see a tough and even match.

And this coming Saturday we will be back to Old Trafford against Brighton, where my friend Bruno Saltor plays. They are another promoted team with good marks in the Premiership so far. We know that every single team is tough; we have experienced that already this season. A win would be very important to confirm what we’ve been talking about in this blog since the beginning of the season.

In my usual review of the Spanish football I’d like to start talking about Valencia, a fundamental club in my career and where I actually met Bruno. The reliability of Marcelino’s team so far this season is amazing. I’m being asked about that here in England and I’m happy to answer and to feel Valencia again as a competitive side that is able to beat anyone, with the crowd absolutely proud of the team. The next game will be against Barcelona, the leaders. A win would keep them dreaming about big goals.

The other main fixture of the weekend was Madrid’s derby, the first one that took place in Atletico’s new stadium. It was a good game despite the goalless draw, a score that allows Barcelona to increase the gap by two points with both teams. Valverde’s team is having no mistakes. We are still in November and they have put quite some distance with the next few teams on top of the table, although I insist: the season is very long for everyone. In Spain and also in England.

Leaving the competition aside, or actually, talking about a different competition, I’d like to tell you that Common Goal has been nominated for the prestigious Peace and Sport Awards –category Champion of the Year–. It’s an annual event to promote those projects that understand sports as a crucial tool that helps to have a world in peace, a better world.

#PSIF UPDATE
Voting closes on 2017 Peace and Sport Awards, as @ManUtd star @juanmata8 was selected among nominees of the Champion of the Year category.

I’m leaving you now, we have to gather strength for what’s coming in the next few weeks, because it’s a lot and absolutely thrilling.

PS: Today’s congrats go to golfer Jon Rahm, who has been named European Tour Rookie of the Year and has won the last tournament of the season in Dubai. With only 23 years of age he’s already an exceptional golfer and I’m sure he has a great future ahead. Congratulations!