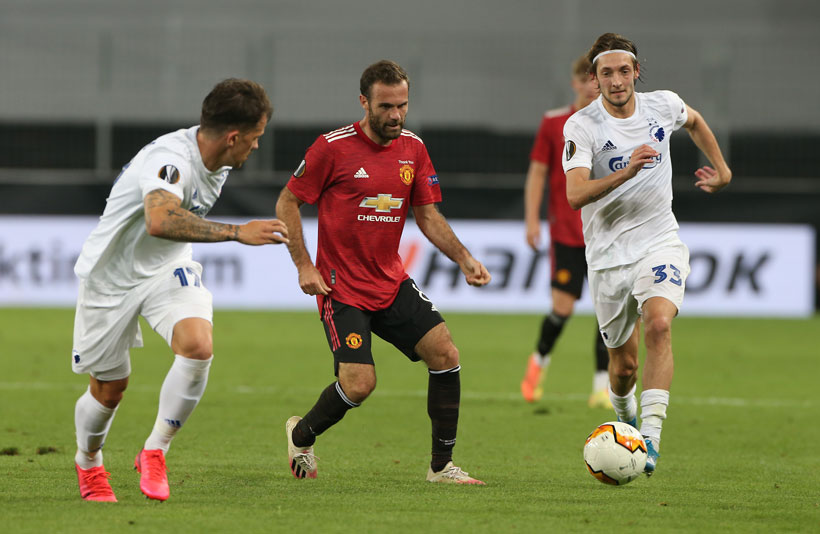 A pass from the Spanish international to Martial ended in the decisive penalty netted by Bruno Fernandes. Juan’s performance in the game was vital to unbalance the match with Copenhagen (1-0). Manchester United will face the winner of Wolverhampton-Sevilla on Sunday.

Juan continues to shine in this Europa League. The Spanish footballer, who had just assisted two times in the victory against LASK last Wednesday, claimed responsibility in the quarterfinals, played at the Stadion Köln. His performance was decisive in extra time, in which United managed to break the deadlock. Mata was crucial in the action of the penalty that meant the final 1-0. On the same play, he gave two excellent passes to Martial, who was fouled inside the area by Bjelland at the second attempt. Bruno Fernandes did not miss from the penalty spot (minute 95).

Throughout the game, the English side could not break the Danish defence. United was close to deciding the clash, but the VAR disallowed Greenwood’s goal, and then another attempt hit the post. Bruno also hit the post, but the score remained 0-0. Juan came on the pitch at the start of the first half of the extra time. In addition to his association with Martial, he took three shots on goal, dribbled twice and had a 91% pass accuracy.

With this victory Manchester United reaches the semi-finals. The rival will be the winner of the game between Wolves and Sevilla. Mata, with two goals and five assists in the competition, will try to contribute to the qualification for the grand final of the Europa League. “We have no preference, Wolves have done well in the Premier League and Sevilla are a brilliant team with a brilliant manager. It’s nice to know we’ve won and can watch that game,” he said.

?️ Solskjaer on Mata: “He’s so composed, calm, clever, has quick feet in tight areas, he can pick a pass, he can calm us down at times and he’s such a great influence with the culture and dressing room.” https://t.co/55uOUQd6Ab