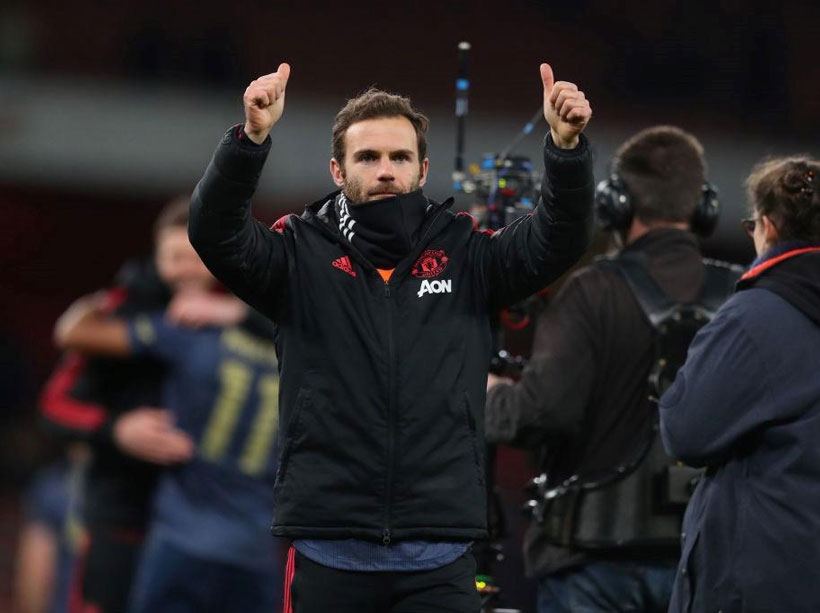 Five years as a Red Devil

Today I want to start off my post by saying thank you. Honestly, thank you to everyone who has remembered that recently it was five years since I arrived at Manchester United. On this exact Monday, as my blog goes up, it is the anniversary of my first game as a Red Devil and it is a date that brings back great memories for me: Old Trafford, the kindness shown by everyone, going from the tunnel onto the pitch, the win…

I can say that today I still hold those same feelings and it is something that I am hugely grateful for. What plenty of you don’t remember is that on that day our current manager was there too… although he was on the opposing bench! I remember his words in the tunnel before I headed out onto the pitch: “Welcome to this fantastic club, Juan, it is incredible, you’ll see. Enjoy it as much as you can and good luck.” Five years later, we’re both still here. 🙂

This anniversary also coincides with the team’s very good form. Eight wins in a row, the most recent coming against Arsenal at the Emirates. To pass into the next round of the FA Cup has been great for the dressing room because, as I wrote last week, it is a competition that excites us a lot and one that we’ve got huge hopes for. As expected, it was a tough game, but the team is playing with more confidence and we are going to battle to carry that on for as long as we can.

We’ll start to do that tomorrow. Our fixture list doesn’t let up and on Tuesday we will return to Old Trafford to face Burnley in the Premier League. We are not obsessing over our place in the league table, but rather enjoying every game, competing and making the most of them as much as possible. With this mentality we are making progress and we’re on the right track. This week there are also two games, as on Sunday we must pay Leicester a visit. As I’ve already said, we are taking things day by day, meaning that currently we only have Burnley in mind.

In Spain, Barça beat Girona at Montilivi, Atlético de Madrid put on pressure by beating a difficult opponent like Getafe and Real Madrid won an exciting game in Cornellà. What grabs my attention is that it is very competitive, as in between seventh, which could be the final European place, and the relegation zone, there is a difference of just nine points, which is less than even the Premier League.

Away from football, the past week has played host to the Australian Open. Novak Djokovic was the deserved winner, after playing the tournament at a very high level. When he does, it is very tough to beat him… Rafa Nadal also stood out, who on top of completing the difficult task of getting to the final, also shone in defeat as always, an example for all whether he is winning or losing.

I want to say a few words about some of my other countrymen, too. One from Asturias, Fernando Alonso, who won once more in the Daytona 24-hour race and another who is going out at the very top. I am talking about Javier Fernández, who said goodbye to ice skating this weekend, bowing out as European champion for the seventh time. He has also been a world champion and an Olympic medalist… Javier is an example to be followed because he has been a trailblazer for a sport that was not well known in my country. Congratulations, Javier.

I also send plenty of my support to Carolina Marín, who had to bow out due to injury in the badminton Masters final in Indonesia. I hope that it isn’t anything too serious!

Finally, as you will have seen on social media, I spent some time last week with Eric Cantona. Yes, that’s right, with the King. How I would have loved to have been able to play in the same team as him… but now we’re on the same team in another sense, as you will all be aware that he joined Common Goal a while ago. I have always admired Eric a lot, I’ve always been hugely interested in him as a person and getting to know him on a personal level was fantastic. I know that a lot of Red Devils will be jealous ;-). King Eric is an artist both on and off the field. A legend, in capital letters.

Hugs, I hope you all have a good week.

P.S.: In recent days I haven’t been able to stop thinking about the disappearance of Emiliano Sala and the pilot that was flying with him. A player that was flying with the excitement that comes with going to a new club, along with uncertainties, dreams, and the hopes that come with a new start… My thoughts and support go out to all of his family and friends, as well as to the family and friends of the pilot, David Ibbotson.