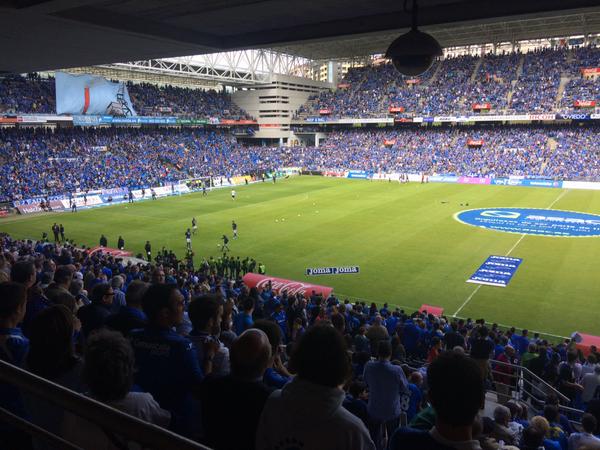 It’s over now… but we’ll be back stronger!

This is my last blog’s entry of the season and I say goodbye until the next one. I hope you have enjoyed this weekly encounter as much as I have. You know, in the good times… and in the bad ones too. This is the end of a season with mixed feelings. In some stages we played very good football, being very competitive especially against our main rivals, and we enjoyed some important wins; on the other hand, there were periods when we were not consistent enough to fight for the title, or suffered some painful defeats. In general terms, we reached the main goal of the club this season: to have the chance to play the Champions League (we still have to earn it in the play-off round), but this team has to fight for trophies, and we will put all our efforts to that after summer. That’s what you deserve.

We finished the season with a draw at Hull that also meant the local team was relegated. It’s not nice to experience something like that on-site, unfortunately this is not the first time I see it. As I said, we approached this game in the most professional way, trying to win. At the end, our draw, plus Newcastle’s victory, leave Hull in the relegation zone. My support to their fans, we hope to see you back in the Premier League soon. By the way, Jonás goal for Newcastle tells a lot about life and the way to overcome the real problems.

In our game, my friend Víctor Valdés appeared in United’s starting XI for the first time. It was a great experience for him and also a reward to his good job at the training ground every week. On top of that, he completed a great game with a few big saves.

From a personal point of view, according to the stats I have played 2,420 minutes, scoring 10 goals and giving 4 assists. They are good numbers but, as always, I’ll try to get better year after year ;-). I hope to keep contributing goals and assists to achieve big things with the team.

Being the last week of the Premier League, we have seen a few farewells and some of them very significant. Like Steven Gerrard’s, for instance. I mentioned him a week ago for his relevance and contribution to the history of football. The same thing can be said, of course, about Frank Lampard, one of the best team-mates I have ever had and someone I have learnt a lot from. A true legend in both English and world football. I wish him all the best in his new stage in the United States and I thank him for his treatment to me at all times. And I don’t forget another great player and former team-mate, Didier Drogba, one of the best strikers the Premier League has ever seen and a phenomenal guy in every sense. With so many legends leaving, a good part of football’s history in England is leaving too.

Since we played on Sunday, I had time on Saturday to watch the games in la Liga, where the last minutes were absolutely thrilling. All of us who have played there followed the end of the championship with a lot of interest. At the Camp Nou, Xavi, a fantastic player, said goodbye to la Liga in Spain. He still has to play the Cup final at the same stadium against Athletic, and that will be Iraola’s farewell too. The last game brought joy to Valencia and Granada. I’m happy especially for my friends from Valencia –you guys deserve to be in the Champions League always– and for Paco Alcácer in particular, a gem of their football academy, a great striker and a great guy. On the other hand, I feel sorry for Eibar’s relegation, a modest club but also an exemplary one. I hope they can enjoy good times soon.

And, of course, I hope Real Oviedo can certify their promotion to the Second Division against Cádiz the next weekend, after a draw in the first leg. The atmosphere in the Carlos Tartiere was simply amazing. The stadium was absolutely full of fans committed to make the dream come true. I hope we can make it this year.

I’m starting to say goodbye… Now it’s time to switch off, to rest and get our strength back with a view to the exciting next season. I’ll see you soon in the tour of the United States. We had a fantastic experience there last summer and we hope to repeat in a few months. Thank you very much for your support in each and every game, you make this sport big and make us feel very proud. We are looking forward to achieve big things all together. Have a great summer!